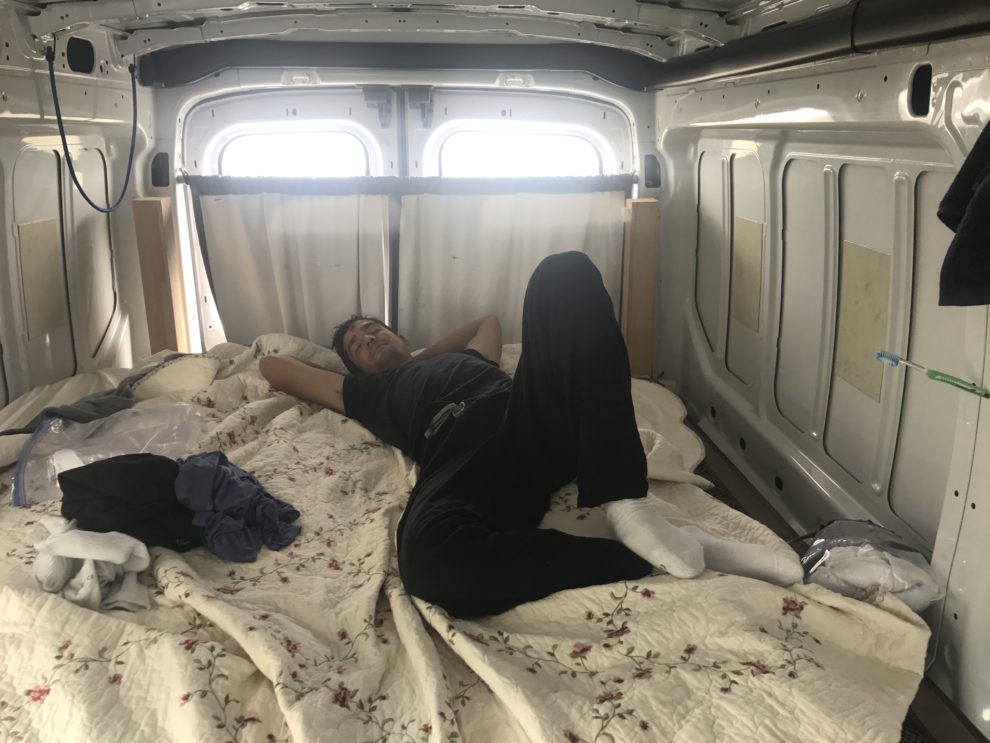 Sleeping Next to a Cell Phone Tower

Unfortunately, I didn’t feel much better in Wyoming so after taking a day to do laundry we decided to head to Jemez Springs, New Mexico after all. The wildfire maps were showing a lot less smoke in New Mexico.

It took us two days to get there. The first day we stopped in the evening to find somewhere to spend the night in Colorado. We came across a promising campground near Walsenburg but they only took cash and we didn’t have any. Bummer.

We kept looking and eventually found a good spot by the side of the road. We were right next to a cell phone tower but didn’t think much of it. We went to a gas station to heat water, took our showers and got in bed.

Next began the most intense thunderstorm our little van has ever had to endure. The raindrops on the roof were making so much noise that we had to shout to hear each other. The wind was shaking the van from side to side. And when we looked out the window we saw that we were in a giant puddle of water. It was crazy!

I tried to sleep until the storm subsided but didn’t have much luck. Even when the rain stopped, I was in pain and just couldn’t sleep. Brett said he wasn’t feeling very well either. Then we remembered the cell phone tower. Why on earth would we pick a spot next to a cell phone tower? What where we thinking? I guess we were just too tired to think.

Even though I’m not normally sensitive to EMFs from electronics, it seemed reasonable to think that a cell phone tower might be putting out enough EMFs to cause symptoms.

I tried to keep sleeping for a little longer but I couldn’t. I haven’t had insomnia in months so we eventually decided that we needed to find another spot. It was then we realized how much we loved the stability of the ranch. No way did we miss wandering around like this! Thankfully, we found a truck pull-out just down the road and fell asleep relatively quickly.

The next day was even worse. We had only driven about 2.5 hours when Brett started to get sick. He pushed through for a while but we eventually had to stop for him to rest. He decontaminated so he could get in the bed. It turns out he had a significant fever. He laid in bed for over three hours before he was able to get up again and keep driving.

I wished that I could drive for him but I didn’t feel quite ready. I need a little more practice before I’m confident enough to rediscover highway driving. So instead, Brett drove us and stopped for short breaks along the way. I felt so bad for him. He was miserable.

It was a huge relief when we finally arrived at Jemez Springs and found a place to sleep. Unfortunately, we forgot our electric tea kettles in Colorado so I had to heat our shower water on the camp stove. It took a lot longer but it worked. We were just happy we made it!