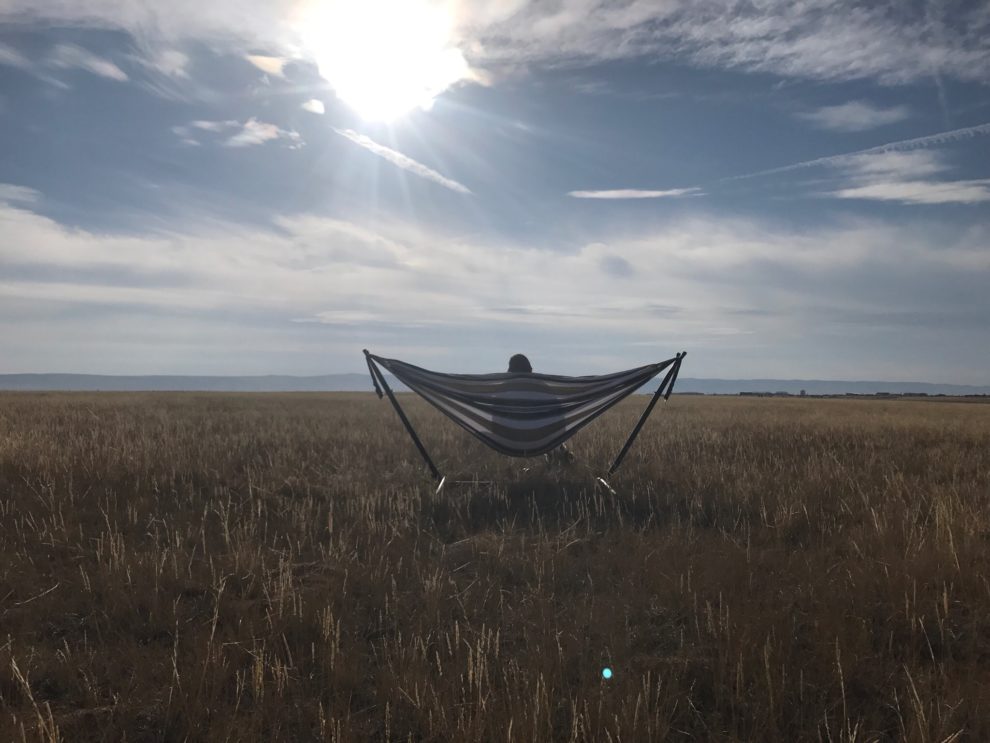 A little over a year ago, I purchased the Gupta Programme, a limbic system retraining program for patients with ME/CFS and related illnesses. I was reluctant to try it but also somewhat hopeful. Mold avoidance is incredibly difficult and I was weary from six months of camping and countless loads of laundry. Maybe brain retraining could help me? What if it really could reduce my reactivity? A friend I love and trust was excited about the program’s potential so I decided to try it.

The first few videos of the program left me  burning with anger. Gupta was claiming my devastating illness was caused by a combination of stress and a virus. He talked about stressful college semesters and difficult jobs. What? What about the rest of the population who are just as stressed and catch the same viruses? Why don’t they get ME/CFS type illnesses? Are they just better at coping with life’s challenges?! I was furious.

Brett gently reminded me that we didn’t need to agree with Gupta’s theory of what causes the illness in order to try the exercises. The program might still be a helpful piece of the puzzle even if he was wrong about a lot of things.

I dragged my feet but kept going. It bothered me that Gupta was not a doctor, yet he was claiming to have a cure. He went so far as to promise 100% recovery to those who stick with the program. I had no problem learning about treatment options from other sufferers but this seemed a bit arrogant. Why wasn’t he more upfront about the fact that he had no medical background? How could he make such confident claims about an illness that is notoriously difficult to treat?

Besides, some of the things he said about symptoms being nothing more than sensations that we assign meanings to, seemed incompatible with my worldview. As a Christian, I believe that truth exists and that suffering and evil are real and not illusions. There is a way that things ought to be and function. The “sensations” we feel when things are not functioning the way God intended are not neutral or meaningless. They are reflections of reality. They are painful because they are pointing to real physical brokenness, not because we decided to interpret them as negative. Still, I tried to give Gupta a chance.

When I got to the part where he starts teaching the exercises, the whole thing started to feel like an elaborate placebo effect. The most important exercise is based on neuro-linguistic programming (NLP). You interrupt thoughts about your symptoms with hand motions and phrases and then visualize yourself 100% healthy. There was also a meditation component where you concentrate on your breathing for 20 minutes each day. Plus another meditation where you focus all your attention on whatever symptom you’re experiencing and say “soften and flow” until the feeling melts away.

I felt ridiculous doing the exercises but something shifted in me when I remembered the biblical story of Naaman. Naaman was the commander of the Syrian army and a leper. He came to Israel because he was told that the prophet Elisha could heal him. Elisha sent word that he should wash in the Jordan River seven times and then he would be healed. Naaman was enraged when he received the message and replied, “Behold, I thought that he would surely come out to me and stand and call upon the name of the LORD his God, and wave his hand over the place and cure the leper. Are not Abana and Pharpar, the rivers of Damascus, better than all the waters of Israel? Could I not wash in them and be clean?” (2 Kings 5:11)

Was I going to be like Naaman? Was I really going to pass up potential healing because I was too proud to accept a solution that seemed silly? Would I choose suffering over a cure that might make me look bad? No way! I decided to set aside my doubts and humble myself. What if Gupta really did have a cure? Besides, mold avoidance probably already sounded just as crazy to most people. I stopped complaining and gave the program an honest shot.

I didn’t tell anyone I was doing it. Not even my family and close friends. I was worried that if the Gupta Programme worked, if simple thought exercises could stop my symptoms, then maybe the neurologist who thought my illness was psychosomatic would be right after all. I didn’t want to plant those hurtful thoughts in the heads of the people I loved, at least not until I had more clarity. Maybe the mold caused a real limbic system injury that these exercises could repair?

Still, I kept silent while I did my brain retraining exercises faithfully. We moved indoors last September and I had healed so much through mold avoidance that I continued to do really well. I couldn’t really tell if the exercises were helping me or not.

On the one hand, seeing how well I was doing indoors led me to experiment with going into more buildings and interacting with more people. I was less reactive than I might have thought. Brett and I even started taking swing dance lessons. Was the brain retraining giving me the courage to try new things? I think it probably was.

On the other hand, I was always feeling conflicted when I was doing the exercises. The breathing meditation was relaxing but that was it. The “soften and flow” exercise never reduced any concrete symptoms like pain or nausea. I think it helped once or twice with anxiety. The NLP portion made me feel like I was playing a complex and exhausting game of denial.

When I experienced a downturn in the winter, I almost gave up on the program. With my friend’s encouragement, I decided to renew my efforts once more but I found that the NLP exercises still made me feel like I was brainwashing myself into believing I was well, when I really wasn’t. It split me down the middle and made me feel like I was at war with my own body. Instead of reducing stress the exercises were causing more stress.

That was when I decided to stop doing them. When I stopped, a huge weight lifted off of my shoulders. I felt happy and free. I was able to bounce back with detox treatments and reached a level of health and stability I hadn’t reached before. February and March were fantastic! They were the best months I’d had since I fell ill in 2012.

Even though I had stopped doing the exercises I was still in the mindset that I shouldn’t try to notice symptoms too much. I was in a good location so I figured it was okay not to think so much about mycotoxins. I stopped paying attention to exposures and stopped decontaminating immediately. I could no longer sense mold contamination on items and thought it was probably a good thing.

Until I woke up one day and realized that I was very nearly disabled once again. How did I end up back here? Had I really spent most of the last four months laying in my hammock? I wasn’t reacting to things in an acute way, but my post exertional malaise was back with a vengeance. My liver was hurting daily. My fatigue was so crushing and my brain so foggy that I was spending my days in a stupor. I was achy all over. My lymph nodes were swollen. I was trying all sorts of supplements to help symptoms with only marginal success.

When I started waking up with a swollen face and throat, I finally got the message my body was trying to send. My environment was no longer clear enough for healing to continue. Unfortunately, I had re-masked (was not reacting to problematic toxins in an acute way) without even noticing.

That was just a week ago. The good news is that I was able to unmask again within 24 hours of camping in pristine air. I have energy and feel like myself again. I haven’t felt this hopeful since I started declining in April! I’m excited about finding a clearer rental outside of the city where I can continue to heal.

It’s not that I think the Gupta Programme is terrible for everyone. I do know people who have been helped by it. I agree that believing recovery is possible is more conducive to healing than hopelessness. I agree that reducing stress and anxiety can help the body to repair itself. But there are other ways to do it that suit me better.

I also agree that avoiding small amounts of toxins that aren’t actually causing harm is unhelpful. But in my case, I believe small amounts of certain mold toxins still cause real harm. Perhaps my blood brain barrier is still healing. Trichothecenes and other mold toxins appear to compromise the integrity of the blood brain barrier. Not to mention, it was mold avoidance itself, not brain retraining, that brought down my insane reactivity to foods, chemicals and non-toxic molds. I expect that with time and detoxification, even my reactivity to toxic mold will start to go down.

I think it’s possible that people can remain hyper-reactive even after tissue healing and detoxification has occurred and maybe that is a limbic system issue. Perhaps experimenting with paying less attention to small exposures and trying to live a relatively normal life could be helpful in that case.

In my case, it was the opposite of what I needed to heal. I have a long history of ignoring and mistreating my body. As a teenager, I deprived it of food and felt a morbid pride when I danced on painful injuries. When I got sick, I pumped my body full of antibiotics for Lyme, enduring excruciating and worsening symptoms because I was told it meant the treatment was working. I coped by distracting myself from the pain and disconnecting from my body. I thought denying my body made me tough.

What I needed most was to reconnect with my body and learn to listen to the information it was giving me. Mold avoidance taught me just that. It showed me that my body was not the enemy and I didn’t need to fight it.

I love this quote from Lisa Petrison of Paradigm Change. This sums up my own experience perfectly,

“I think the best strategy is to learn to cultivate your intuition. Which is to say, probably, to learn to treat your limbic system as a team member rather than an enemy.

I think it may be that the limbic system may get damaged by some of these toxins and that it may overreact due to kindling issues.

But I think it is more the case that in most cases, people have learned not to listen to what their limbic system is telling them, throughout their life, and so have a tendency to override it. And therefore it feels like it needs to start screaming to be heard.

So my goal – actually for both of these problems – is to make a better effort to get in touch with what your intuition is telling you about the environment and to have it be a concerted goal to be able to tell less problematic toxins from more problematic toxins.

And then, as time goes on, to trust the intuition more and more. To the point that, eventually, there is no question but to just do what it suggests. Like say, a bird would do, in terms of deciding whether to stay in a particular environment or move on.”