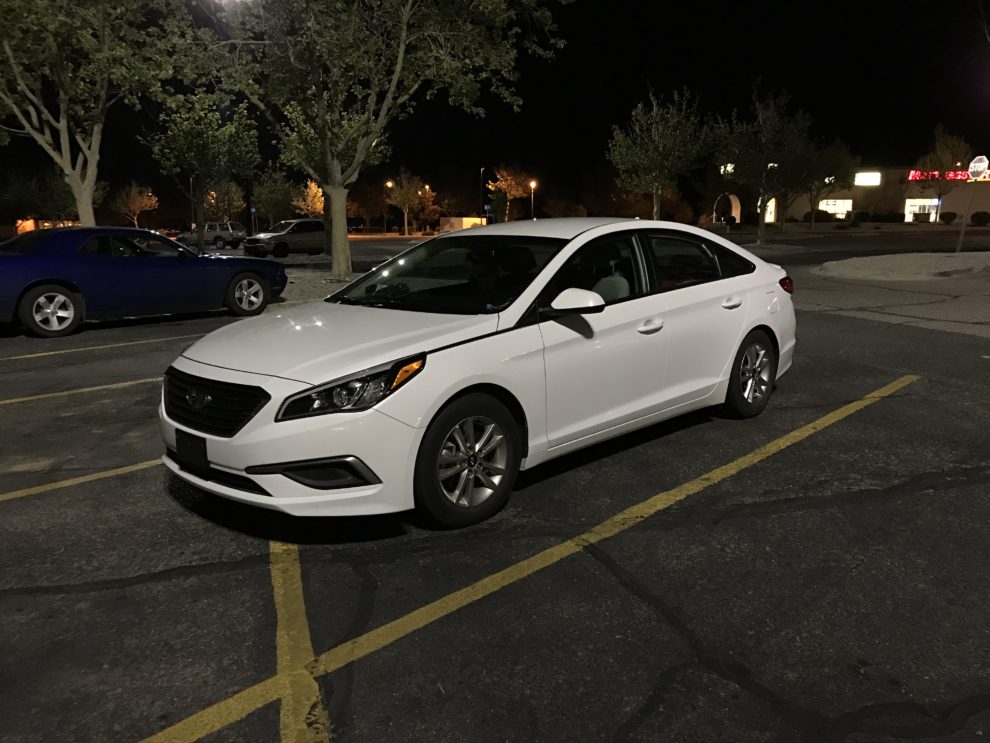 By some miracle, Brett was able to sleep through the train sounds last night. I, on the other hand, was woken up every 30 minutes when a train came by. It was so annoying!

By 8:00 this morning I had had it with the trains and I told Brett I wanted to leave immediately! I didn’t care that I was hungry and hadn’t had breakfast.

We decided to head toward Grants, NM and see if we could find some feel good areas to camp in Malpais State Park. When we reached the park we decided to stop at Sandstone Bluffs. The air felt great there. We got to climb up the bluffs and look down at the valley. Apparently, volcanic eruptions have shaped the landscape here and the whole valley was covered in black lava. It was really cool!

After we snapped some photos, we decided to check out the BLM campground nearby. It didn’t have an RV dump station and felt better than most of the campgrounds I’ve tried. Still, there was one RV there and I didn’t feel good enough to want to stay. RV septic systems are often contaminated with problematic biotoxins. It’s possible that I would have felt fine without the RV. I don’t know.

We decided to keep looking but had stop so that Brett could call Hertz Rental first. It turns out that there’s a 2 month limit on how long you can keep the same rental car. Tomorrow is our deadline and we wanted to change the return location to Albuquerque.

We rented the car in Durango, CO and that was where we were supposed to return it as well. Unfortunately, we found out that switching the return location meant changing it from a round trip rental to a one way rental. One way rentals are more expensive and they were going to have to charge us an extra $1,400 to do that. No way!

Durango is almost 4 hours away! Not to mention, I did not do well in that location, even before unmasking. Thankfully, we called my dad and he suggested we could go to the Albuquerque Hertz Rental and see if we could talk to someone in person. Maybe they could make an exception for us.

We thought that was a good idea and decided we should get it figured out right away. We can keep looking for a campsite tomorrow. The drive from Malpais to Albuquerque was about 1.5 hours.

When we arrived Brett went in to talk to the Hertz manager. It took quite a while but he emerged with good news. They made an exception for us! Not only that, they lowered our overall price! Wow!

Now it was time for me to choose a new car. I was very nervous about the car picking process! I’d heard horror stories of other mold avoiders renting out cars that felt fine in the parking lot but ended up having mold in the cabin filters. What if they didn’t have a single car that felt good?

My worries were interrupted when I saw this tiny puppy in the parking lot. He was so cute! An adorable little mutt! His owner let us pet him and that lifted my spirits as I got ready to test cars.

Brett had already ruled out 4 cars that smelled really strongly of chemical cleaners. There were a few that he thought had a shot. Unfortunately, I felt nauseous and headachy in all of them. Thankfully, there was no employee present so I was able test additional cars without feeling any pressure.

We went down the row, avoiding cars from states with particularly problematic cities. Each time, I would stick my head in and if I didn’t react I would go ahead and sit down. If I thought it was okay, Brett would close the door. We tested at least 14 cars this way and it was looking pretty bleak. I had increased symptoms in all of them. One of the Colorado cars was so bad that I had to leave the parking lot to decontaminate.

We were running out of cars to try and starting to feel discouraged. It felt like my fears were coming true. Finally, I spotted this white car we hadn’t noticed before. It had a Kansas license plate. “I think Kansas is a decent state! Let’s try it.” I said.

As soon as I got in, I knew this one was different. None of my symptoms worsened! “I think this is the one!” I shouted. I didn’t know at the time but just seconds before I got into the car Brett had prayed for a miracle. God answered!

Brett went into the building to let the manager know that we had finally found a car I wasn’t reacting to. We then transferred our stuff and headed back to Malpais State Park. We were both so happy and relieved! We’re so thankful to God for providing this car. Hooray!