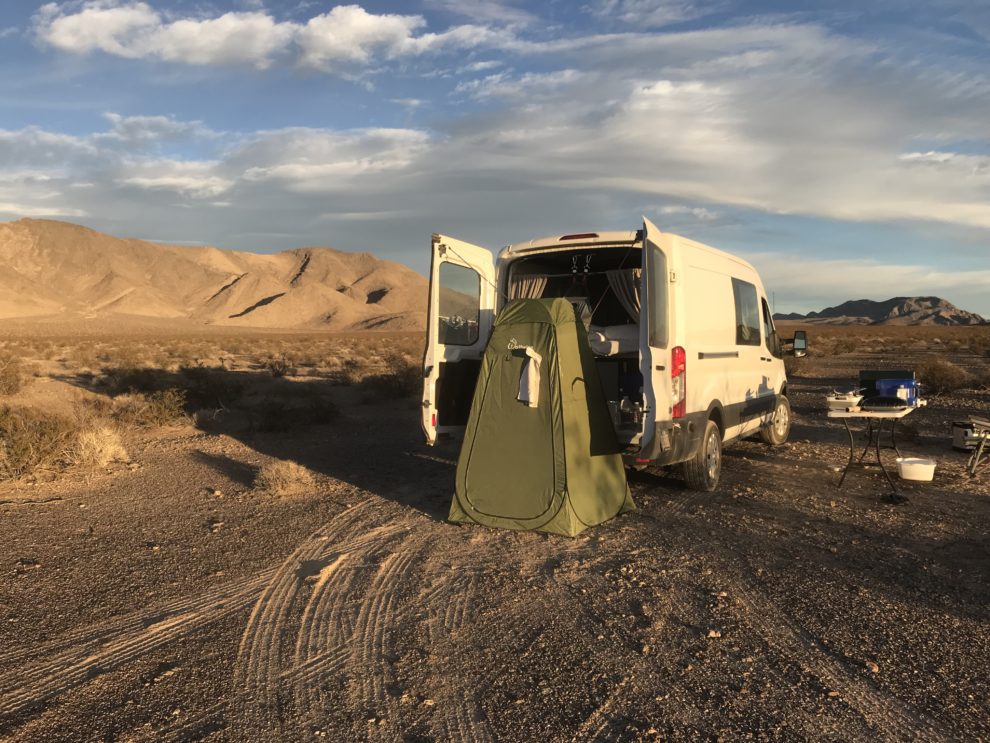 A Dozen Moves in 30 Days

It’s been a while since I last sat down to write. Red Rock Canyon has a strict 14 day limit. Our time ran out four and a half weeks ago and we’ve been bouncing around ever since. We moved a dozen times already!

We spent time in Armagosa Valley, Morongo Valley, Mojave Preserve, and Death Valley. Often it was the need for reliable cell service in order to get work done that forced us to relocate. Other times it was logistics like not being able to get water without going into a town I can’t tolerate. In the Mojave Preserve it was a windy cold spell we weren’t equipped to deal with.

Last Monday night, in Death Valley, it was a 30-something man who was talking to himself loudly and singing disturbing songs about guns and death. He kept yelling profanities at anyone who walked past his campsite to use the bathroom and couldn’t stop complaining about people’s headlamps. When Brett went to fill our water bottles, the combative man cursed at him and shouted for him to “get your f*cking light out of my eyes!”

I fumbled around to prepare dinner while Brett kept an eye on the man. Suddenly, Brett whispered, “Get in the van!” in a protective and commanding tone. It was the same tone he used to tell me to get away from the window the one time we heard gunshots near our neighborhood.

That was when I started to get really, really nervous. Could this guy be violent? What if he had a gun? My heart was pounding but I got in the van and closed the door.

When Brett got in, I whispered, “Let’s get out of here! I’m scared!” Brett told me the man threw a rock at us when he turned his headlamp back on. That was why he told me to get in the van.

They advised us to spend the night there, instead of returning to our campsite, and we didn’t get to find out what happened until the next day. We were a little worried that we were being overly dramatic, but we figured it was better to be safe than sorry.

The next morning, one of the rangers came to drive back to our campsite with us and make sure the man was gone. Apparently, they had let him spend the night there but confiscated some of his belongings to ensure he would leave in the morning.

When we spoke with the other campers we found out that they were just as concerned as we were. They told us the man was hiding behind a bush when the rangers came. He behaved somewhat reasonably while they were present but as soon as they left, he loudly proclaimed, “I’m still here!!!” And spent the next two hours, pacing the entire length of the campground angrily kicking the dirt and rocks. One poor man didn’t fall asleep until 3am!

Another camper told us that even before we left, the man had become agitated about his flashlight and actually grabbed him. The camper said he was able to push the man away without a problem but was a little worried he might have a gun. They all really appreciated that we went to get help and couldn’t believe that the rangers let him stay. I guess we weren’t overreacting after all!

Less exciting and more common than being driven away by angry and combative men, is being forced to leave because of a change in air quality or a moldy neighbor. That’s happened more times than I’d care to count and it’s become quite clear that I’m going through intensification again.

Intensification is a phenomenon that many chronic illness sufferers experience when they finally get clear from mold toxins. Basically, your sensitivity to re-exposures goes up even as your body begins to detox and heal. Since this is not an illness that science understands fully and since mold avoidance is not a treatment that medical researchers are looking into, I can’t really tell you why this happens.

Unfortunately, places and objects that didn’t bother me when I was masked are now bothering me a lot (Like our camping pads, phones and Brett’s computer!😕). Since mold avoidance is such a bizarre and unfamiliar treatment to most people, I thought I would share a quote from The Beginner’s Guide to Mold Avoidance that explains the concept of masking:

“People who are very hyperreactive to toxic mold almost invariably have no idea that it is affecting them at all. This is largely due to the fact that if the body is exposed to a problematic substance on a continual basis, it will stop reacting acutely and instead do its best to cope with the exposure. This is called masking. The phenomenon of masking is well-accepted with regard to gluten sensitivities or other food intolerances. If someone is suspicious about whether they might be reacting to gluten, then the generally accepted best way to find out for sure whether it is an issue is to remove all traces of it from the diet for a few weeks. If gluten indeed is a problem, the negative effects of it will be much more noticeable when it is reintroduced into the diet after a vacation from it.

Living in a moldy house, day in and day out, is the same principle as eating gluten at every meal. Without any break from the problem substance, the body will deal with it as well as it can. Especially for someone living in a bad environment, it takes effort to avoid toxic mold to the degree necessary to get clear. But until people get clear, they have no way of knowing whether they are reacting to toxic mold at all. All that they generally know is that they are sick, for no apparent reason.”

I re-masked in our apartment in Rapid City. Especially during our last six months there, I was slowly declining physically but no longer reacting to exposures acutely. I don’t know exactly why that happened but I believe a combination of factors led to it.

First of all, I wasn’t doing a good job sensing exposures, controlling for cross-contamination and protecting my safe space. Secondly, I suspect the closet and washing machine in our apartment may have been developing some minor mold issues. Lastly, something definitely changed in the outside air. Maybe it had to do with the wildfire smoke. Maybe it was the extra stormy summer causing spores to act up. Maybe it was something they sprayed on the golf course across the street or something else altogether. I don’t know.

In any case, I decided that being unmasked and doing extreme mold avoidance was better than being masked and miserable. I didn’t expect to go through this level of intensification but I don’t regret my decision. I’m more reactive than I was when we left Rapid City but I’m suffering much less.

I made a list of all the symptoms I was experiencing before we left Rapid City to remind myself that these are my exposure symptoms now. They aren’t as dramatic as some of the symptoms I had when I was more severely ill. Taken individually they are easy to explain away. Together they are quite disabling. I made the list to remind myself not ignore them because all of these symptoms have resolved in just two months of mold avoidance. They now only occur upon re-exposure.

Here’s to life without:

Numbness/tingling in the hands and feet

In addition, I made a list of things I couldn’t do during my last six months in our apartment that I do easily and eagerly in the pristine air.

Hauling water (maybe not so easy!)

Mold avoidance works! It’s hard, and lonely, but it works! I like to say that it takes the suffering out of my body and puts on the outside, onto our circumstances. For me the external suffering is less painful than the bodily suffering. It’s a trade we chose to make this time. We made it with our eyes wide open and with the hope that extreme avoidance will allow my body to heal enough that someday we won’t have to choose between internal and external suffering. Someday our longing for stability and community, roots and family will be fulfilled. I’m more determined than ever to recover.