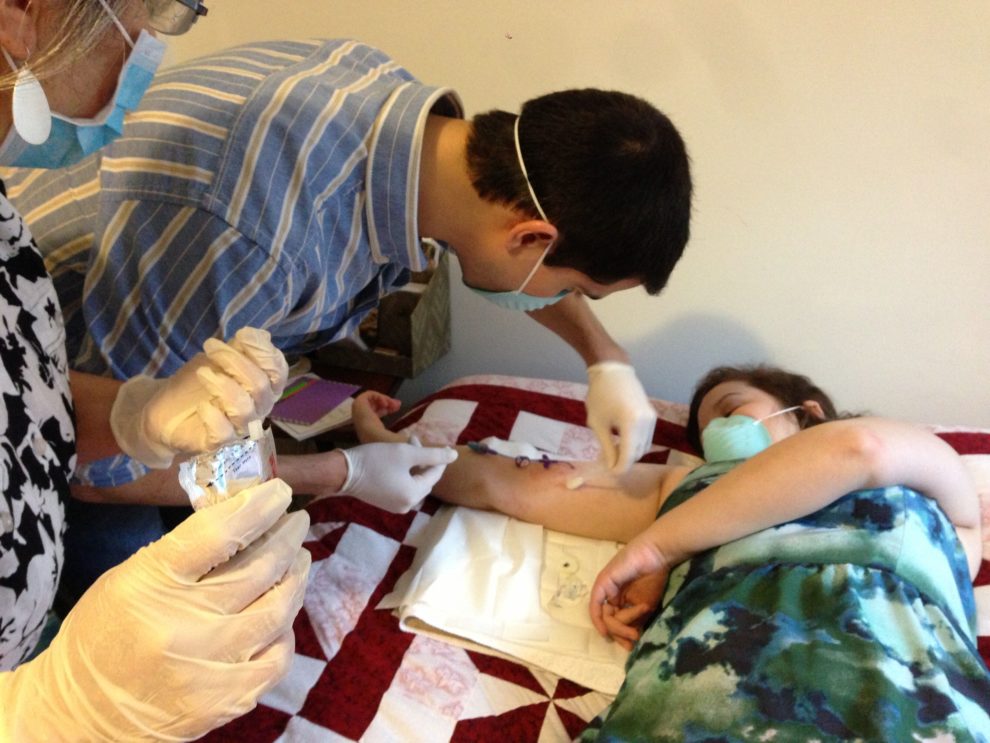 Why I Regret My Lyme Disease Treatment

Several weeks ago, someone with a very ill loved one contacted me to ask who treated me for my Lyme Disease and what treatments I recommend. It’s a question I‘ve been asked countless times by friends and strangers alike. For five years, I recommended Dr. Jemsek and pulsed antibiotic therapy.

However, the paradigm shifting experiences of these last two years have changed my answer significantly. So I think it’s time to address this publicly.

The honest truth is, I don’t recommend Lyme Disease treatment anymore. In fact, I regret my entire Lyme Disease diagnosis.

Let me explain why…

When I fell ill in 2012, I did what most sensible people do. I made an appointment with a family doctor, a real doctor, with MD after his name. I was diagnosed with a sinus infection and given antibiotics. I believed the doctor and took the antibiotics. I stayed sick.

When my health continued to decline, I did what most people would do in my situation. I went back to the doctor for more tests. When the tests failed to diagnose me, I assumed I just had some extra serious sinus issues and made an appointment with an Ear, Nose and Throat specialist (ENT). Perhaps I needed surgery for these terrible sinus problems that were somehow also causing widespread body pain, extreme fatigue, post exertional malaise and brain fog in addition to serious headaches. The ENT ordered a CAT scan showing that my sinuses were perfectly clear and said I was probably having cluster headaches (a neurological problem).

As I descended into disability, I attended many more appointments with a variety of different doctors. No one could diagnose me. The best I got was my childhood pediatrician speculating that it might be hypothyroidism even though my numbers were within the normal range.

Then my father went to see his doctor for his annual checkup. They got to talking about me, his very ill daughter that nobody could diagnose. This doctor, also a real doctor with MD after his name, thought he knew what was wrong with me. Can you imagine the hope that gave me? Finally, someone who could put a name on this misery!

I scheduled an appointment and was diagnosed with Lyme Disease based on symptoms and a positive Western Blot test. I couldn’t recall a tick-bite, never had a bulls-eye rash and didn’t have any major joint swelling. But I grew up in a Lyme-endemic area and was reassured that ticks are tiny and hard to spot and that the the bulls-eye rash and joint swelling don’t always occur. Sometimes the infection can hide inside the body for many years before it becomes virulent. I had a neurological manifestation of the disease and a positive blood test. The doctor put me on doxycycline and encouraged me to read up about the disease on ILADS.org.

I was relieved! Finally! I knew what was wrong with me and could pursue effective treatment. We immediately noticed that this was a diagnosis steeped in controversy. We tried to educate ourselves on the two positions. ILADS doctors and chronic Lyme sufferers believed Lyme Disease could become a chronic condition and that the infection often survived the standard antibiotic treatment recommended by the CDC. The IDSA disagreed. They acknowledged that symptoms could persist after a 28-day course of antibiotics but didn’t believe it was due to ongoing infection. They called it Post Lyme-Disease Syndrome and offered little hope past lifelong symptom management.

We had our doubts, but we decided to trust the doctor who diagnosed me. The IDSA perspective didn’t offer any hope. At least with the ILADs perspective, there was a possibility of recovery with ongoing treatment.

As the months went by, that possibility of recovery never actualized. It wasn’t long before my doctor encouraged us to find a Lyme specialist. He openly admitted that he didn’t have much experience treating serious Lyme cases.

The specialist we chose took an integrative approach, combining herbal treatments like the Cowden protocol with a few prescription medications. I continued to decline. By this point, I was bed bound and suffering very severe pain and sound sensitivity along with a myriad of other symptoms. My condition was worsening, but I was reassured that this was expected and only meant the treatment was working.

After six months, I became convinced the herbal treatments were not the answer and that I probably needed IV antibiotics. We ended up at the doors of the Jemsek Specialty Clinic. Dr. Jemsek is one of the top Lyme Disease specialists in the country. Dr. Horowitz is another top specialist we were seriously considering, but we chose Jemsek because he was a board-certified infectious disease specialist. Plus, I now had serious doubts about all the naturopathic treatments Horowitz was using in addition to antibiotics. I wanted “real” science and was ready for some “real” medicine.

Well, all that medicine left me even sicker than before. I do believe the 9 months of IV antibiotics killed some pathogens. Probably even Lyme Disease and co-infections. But I couldn’t regret it more. My symptoms and pain levels spiked severely. It was hell on earth and I wouldn’t wish it on my worst enemy.

Eventually, I made about a 50% recovery from my absolute lowest point. That left me right back where I started. Five years of Lyme treatment to get me back to where I started before the Lyme diagnosis! Something was not right!

Still, we believed the doctors and continued to spread awareness about chronic Lyme Disease. We encouraged people to watch Under Our Skin and read Pamela Weintraub’s book Cure Unknown. We pointed people to ILADS and recommended Lyme-literate physicians. We were super-careful about ticks.

Mercifully, I went on to develop the life-threatening mast cell disease that led me to consider mold avoidance. Mold avoidance turned out to be so effective, not only for the mast cell issues but for ALL my symptoms, that it threatened to undo our Lyme Disease paradigm. In pristine air, suddenly, I didn’t have Lyme Disease anymore. It wasn’t long before that paradigm died the death that it deserved.

I’m not saying that chronic Lyme Disease infections don’t exist. I‘m pretty sure they do. I’m just saying that whatever infections I had, and I know I had some, they were not the root issue for me.

From the very beginning, my illness met the criteria for a Chronic Fatigue Syndrome diagnosis (also known as ME/CFS). I was a textbook case. Unfortunately, I rejected the possibility that I had ME/CFS because the Lyme community, including doctors, said that ME/CFS was a dead-end diagnosis. And in some ways, it is. It has a trivial sounding name and no one knows how to fix it. The best the doctors can currently offer is lifelong symptom management.

But here’s the thing. I’ve come to the conclusion that chronic Lyme Disease is also a dead-end diagnosis. Doctors offer you a solution but that solution rarely delivers. Often, as in my case, it leaves you sicker than before. I only know of one seriously ill patient who has recovered vibrant health by pursuing antibiotic treatment for chronic Lyme Disease. The two others I know who made some significant progress, later went on to relapse.

So, I’ve decided I’d rather take a dead-end diagnosis (ME/CFS) that is now recognized by the CDC as a serious disease, accurately describes my symptom pattern, and doesn’t lead me to pursue expensive and damaging treatments than a dead-end diagnosis (Chronic Lyme Disease) that isn’t recognized by the CDC at all and leaves me in the exact same place, or worse, anyway.

Here’s the thing. If I had accepted the diagnosis of ME/CFS to begin with, I probably wouldn’t have wasted so much time in the hellhole that is antibiotic therapy. I probably would have realized the doctors didn’t have any real answers sooner. Perhaps I would have taken responsibility for my own health sooner and maybe even discovered mold avoidance. Just because there are no CDC-approved answers doesn’t mean a disease hasn’t been accurately described and identified. Just because the doctors don’t know why things went wrong doesn’t mean there’s no value in understanding what went wrong.

Erik Johnson was one of the first ME/CFS patients to be examined by Dr. Cheney. Erik was present during the Lake Tahoe epidemic and his observations led him to conclude that the why has something to do with toxic mold. Possibly ordinary molds becoming more toxic in the presence of certain man-made chemicals. Perhaps the toxicity from these extra bad molds accumulates in the body and causes all sorts of dysfunction that allows a variety of pathogens to take root. Maybe even Lyme and other tick-borne infections.

Erik recovered to an almost unbelievable extent by scrupulously avoiding these problematic molds. He can work a job and climb mountains for crying out loud! If I hadn’t gone down the rabbit hole of chronic Lyme disease, maybe I would have heard about his story sooner. Maybe I wouldn’t have spent 5 years and tens-of-thousands of dollars chasing answers in the wrong direction.

In the end, the Lyme community was right that I shouldn’t settle for lifelong symptom management and that it’s important to keep searching until you identify a root cause. But I’ve come to believe they were wrong about what that root cause is.

Of course, my story is still unfolding, so I can’t claim to know with certainty that mold avoidance is the complete solution. But I do know that it is moving me towards a real recovery in a way that nothing else ever did. This is more than symptom management and the slowing down of an inevitable decline. This is true healing.

And I know many other patients who are experiencing this same amazing healing. I have a good friend, whose adult daughter was on death’s door after years of Lyme Disease treatment. She couldn’t walk, could barely talk and struggled to eat anything. She was down to only 68lbs. When my friend, her mom and caregiver, started learning about mold avoidance, she thought, “This sounds harder than going to the moon.” Given her daughter’s critical condition, she and her husband courageously chose to pursue it anyway.

Her daughter is now walking, talking, eating and cooking. She even went for her first run last month! No one ever came back to me with a story like this after my recommendations to start Lyme treatment. Not. one. person.

Bryan Rosner, a well-known Lyme Disease author, has also discovered the power of mold avoidance. In his new book Lyme Disease Supercharge he shares that mold avoidance was the single most helpful thing he’s ever done for his health (chapter 8).

He goes on to write:

It’s not that attacking pathogens directly is never helpful or necessary. It’s just that all the antibiotics in the world aren’t going to help someone whose illness is primarily a toxicity problem. I don’t know for sure if everyone with chronic Lyme Disease has an underlying toxicity problem, but I believe strongly that those who are failing treatment would benefit from trying out a new paradigm.

Back From The Edge: How One Man’s Discovery Brought Him From Desperately Sick with Chronic Fatigue Syndrome to the Top of Mt. Whitney in Six Months

Lyme Disease Supercharge: The Revolutionary Approach to Getting Better When All Else Fails