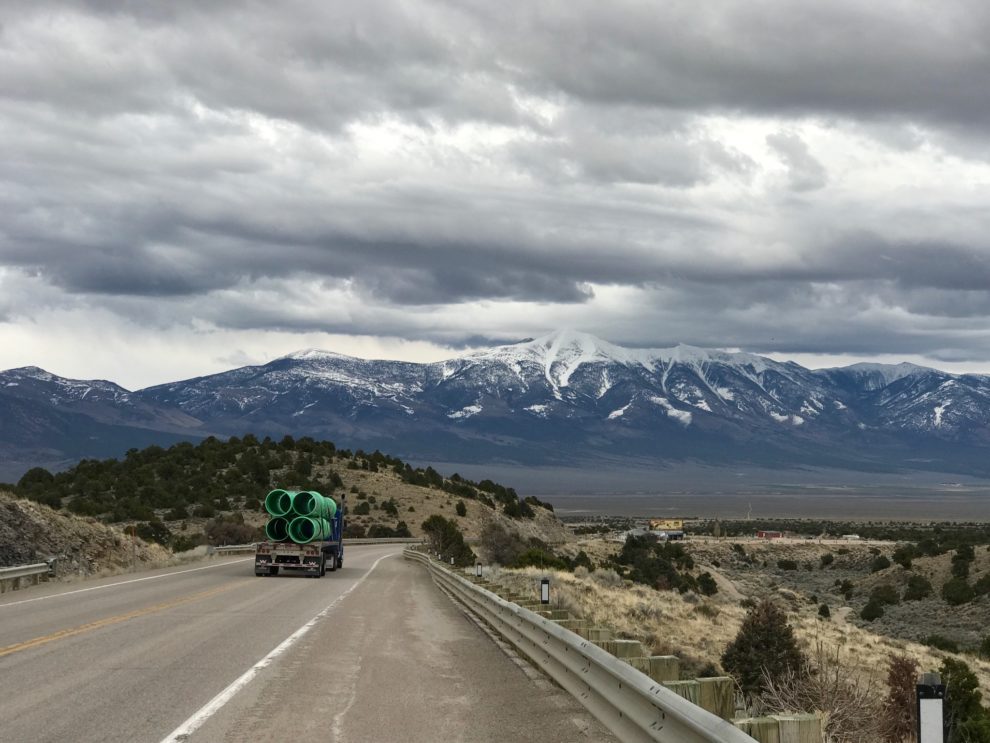 Day 13 | The Loneliest Road in America

This morning Brett needed to make a work related call so we drove back into Wendover and sat in a McDonald’s parking lot. Then we decided to drive towards St. George, Utah where it was supposed to be warmer and there are more places to camp.

We didn’t get very far before we had to stop on the side of the road for a potty break. It turns out that we just so happened to stop in a “feel good area”. I felt like skipping when I got out of the car! Brett and I even did a little dance! 😊

We decided to stay and work on launching my website for a little while, since this was the first “feel good area” we’d come across that had cell reception. Yes, I launched my website from my iphone without any wifi access! I was thrilled to finally get it up!

Mysteriously, I did get some pretty bad hives while sitting in the car even though I felt good otherwise. We’re still not really sure why that happened. It could be that Brett brought in some contamination from the McDonald’s building, maybe some of the things in our trash bag were starting to mold or maybe I was just reacting to the toxins in my own sweat. Sweating is one of the ways our bodies detox and it’s very common for Biotoxin Illness sufferers to react to their own sweat and even contaminate their own clothing. I felt great outside in that little nook though!

Once the website was launched we continued on our journey. We were even able to call my family while we still had some reception. While we were on the phone and going 60mph the road curved and just a few feet ahead we saw a herd of twenty deer. The leader was standing tall and proud, right in the middle of the road! I screamed and Brett honked the horn. Thankfully, the deer moved out of the way quickly and no one was hurt.

We lost reception as we drove into the mountains on what the map said was called the Loneliest Road in America. We thought it was rather fitting, and chuckled, as it does often feel like we are traveling the loneliest road in America.

Then we saw this one majestic mountain peak among the clouds that looked like it was touching the ceiling of the sky. I loved it so much that Brett pulled over to take a picture.

While Brett was photographing my favorite mountain, a contaminated truck zoomed past. How did I know it was contaminated, you ask? My throat started tightening in the seconds while it was passing and stopped just as quickly when the truck was out of sight. Since the symptoms subsided instantly, I decided I didn’t need to decontaminate.

I was wrong, however, and as we continued driving I started getting itchy and noticed I had fresh hives on my legs. We finally decided to stop and decontaminate. The air was frigid and I begged for mercy as Brett dumped the cold water on my head. Afterward, I still felt bad which was unusual, so we decided Brett should try to decontaminate as well. Poor guy!

I think whatever that truck was carrying must have been pretty bad because it took a long time before I started to feel better. Or perhaps it was just that I was unable to avoid the aftermath of exposure because I waited so long to decontaminate.

We were then able to sing some worship songs to God as we approached the St. George area. I had to stop most of the songs when they got too intense with lots of different instruments so that I wouldn’t get overstimulated. But it was amazing to be able to listen to music again after so many years of sitting in silence because of my severe sound sensitivity.

We decided to check out Snow Canyon State Park near St. George. Unfortunately, none of the parking areas allowed overnight parking and I started having a mild reaction. It’s becoming clear that I just can’t tolerate more developed campgrounds. At least not during intensification. It’s likely that I’m reacting to the RV dump stations near campsites. RV sewage tanks often have mold and cyanobacteria problems.

We eventually found a spot to park for the night just outside of Snow Canyon State Park. I didn’t feel great there but I also didn’t have any severe reactions. We couldn’t lean our seats back because our car is so full of stuff and we struggled to get comfortable. Thankfully, we were so tired that we eventually fell asleep.