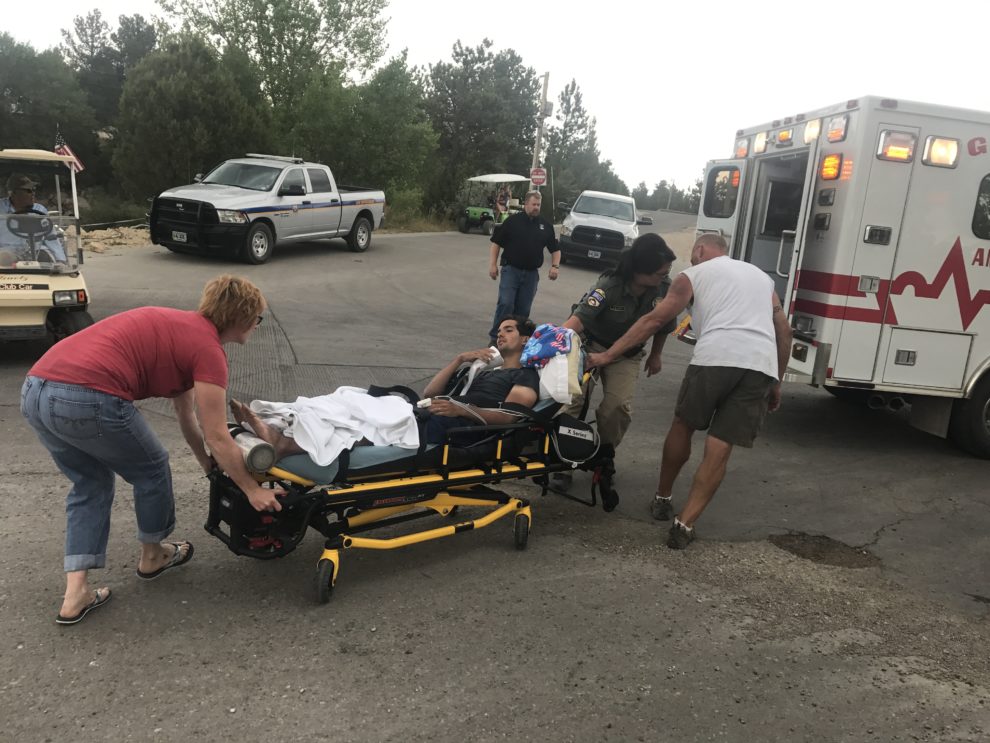 Today was another hot day and by late afternoon we were both exhausted and borderline miserable. I was especially tired and didn’t feel like I had the energy to do anything more.

So we decided we might as well go jump in the reservoir before coming back to make dinner. We invited our friend, Sara, to come with us again. We weren’t planning to stay long. Just long enough to cool down a little bit.

Since we were trying to keep it short, we went to the closest beach. It wasn’t quite as nice because the ground was really rocky, but the water felt just as refreshing as it did yesterday. After only a few minutes we were already feeling much better.

There was a little island we could see from the shore and Brett was feeling so good that the idea of swimming over to it struck his fancy. It didn’t seem that far away and a minute or two after voicing the idea, he set out for the island.

Ramona started barking like crazy when she saw that he was leaving so I got out of the water with her and tried to calm her down. Nothing was working and I eventually gave up and took her back to her crate. The crate is her safe place and she usually calms down in there.

After I put Ramona in the crate, I got back in to enjoy the cool water and noticed that Brett had made it onto the island. He did it! Wow!

Sara and I could see him but it was far enough away that we couldn’t really make out what he was doing. It looked like he might be sitting on the bank of the island resting.

I wasn’t worried, but after a while Sara asked, “Do you think he’s okay? I feel like something might be wrong.” I didn’t know what to think. I waved to him but I couldn’t tell if he waved back or not. Then I shouted, “Are you okay?” He shouted back something that I couldn’t quite understand. “That sounded like a ‘no’, didn’t it?” Sara asked.

I didn’t want to believe it but the adrenaline was already kicking in. I ran out of the water and up the hill to the van as fast as I could. Then Sara drove us around to the marina to see if we could find a ranger station or someone who could help. We thought maybe he was stuck or had gotten a cramp. My heart was pounding and I felt like I simultaneously had no thoughts at all, and a thousand thoughts running through my head.

When we got to the marina we realized we could drive down to the water really close to the island, since the island was right next to the side shore. When we jumped out of the van we saw that something was seriously wrong. Brett looked really sick and he was vomiting over and over. Oh no! This is worse than I expected. What happened?

A man on a jetski stopped to help just as we got close to the water. Brett was so weak that the man had to drag him off of the island and onto the shore. I had never seen Brett look so helpless. It was terrifying! I wished I could do something! Anything!

When they reached the shore he vomited again. His face was pale and he looked absent. When he first tried to speak I couldn’t even understand him. His voice was low and garbled. My heart started beating even faster. What is happening? This is bad. This is really bad.

By then, a small crowd was gathering and a kind man who also happened to be a nurse stepped in to help. Both men helped Brett get to a more comfortable spot and laid him down. A little boy offered a towel so that he wouldn’t have to rest his head on hard concrete.

The nurse immediately started asking him questions like, “What is your name?” “Where are you?” and I was relieved to hear that he was able to give the correct answers. His voice sounded weak but at least I could understand what he was saying now.

The nurse told us that he should definitely go to the hospital because if he swallowed water it could be really dangerous. Brett’s hoarse voice interrupted slowly, “I didn’t swallow any water. I just swam too far.” I hoped with all my might that he was right.

Whether or not he swallowed water, it was clear to all of us that he was seriously dehydrated and he needed to get some IV fluids ASAP. So a kind onlooker called 911 for us and they sent an ambulance.

I was in shock as I watched him laying on the pavement, motionless. He looked ghostly. I knelt beside him and stroked his hair. Then I whispered in his ear that I was going to ask my family to pray and would be right back. I ran to the van to text my family and then ran back. Phew! He’s still alive!

While we were waiting for the ambulance, Sara hugged me and I started sobbing. It was the first time I had a moment to feel anything and I realized I was a lot more scared than I thought. What if he’s not okay?

The ambulance arrived just as Brett was vomiting again. Soon the paramedics were surrounding him and lifting him onto a stretcher. I heard one of them say, she had a feeling that it was just severe dehydration. That was reassuring but nothing was more reassuring than hearing Brett say, “take a picture for your blog!” as he was being wheeled into the ambulance.

To me, it meant that he was going to be okay. He must know that he’s going to live, if he’s even thinking about the blog. Then he told Sara to take care of me and make sure that I didn’t go into any buildings that would be dangerous for me.

I wanted to ride with him in the ambulance but I decided it probably wasn’t the best time to push the boundaries of my mold reactivity. The hospital was 40 minutes away and if the ambulance turned out to be a problem, I would be trapped.

So Sara and I followed in the van. I figured going into the hospital wouldn’t be a huge risk because I could always leave and decontaminate if I reacted. Plus, Sara reminded me that with my adrenaline so high, my immune system would probably be fine.

While we were driving, I texted Brett’s family to ask them to pray too. The drive seemed like forever and I had no way of contacting Brett. I wished I had thought of giving him his cell phone! At this point, I was pretty sure he was going to be alright but I still had a nagging fear at the back of my mind.

When we got to the hospital I couldn’t wait to get in. I was hopeful but nervous. What would we find out?

As soon as I saw Brett though, a smile spread across my face. He looked like my husband again! There was color in his face, his voice was familiar, and he was back to his goofy self. I couldn’t believe IV fluids could work their magic so quickly! The transformation was amazing!

A nurse came in to check his blood pressure and Brett asked if he could see the doctor. He felt like he was ready to go home. When the doctor came in, he agreed!

While we waited for the nurse to come in with the discharge papers Brett told us more of what happened. He said at first the swim was pleasant and easy but when he reached about the halfway mark he started getting tired. It was then that he realized swimming to the island was a really stupid idea. Only now it was too late, he was in the middle of the water and had no choice but to keep swimming or he would drown.

He decided to count strokes to stay focused and he kept pushing and pushing and pushing. As soon as he made it to the island his body was done. He felt like his head was going to split open and he started vomiting over and over. He said he must have vomited at least 20 times. He had no strength left at all.

Then the nurse came in with the discharge papers and he gave Brett a lecture about how people die trying to do what he did. Brett reassured him that he never wanted to do it again. The nurse also gave him instructions to drink a lot of water and avoid activity for the next few days.

When Brett got up I could tell he was still a little weak but I had no doubt that he was going to be okay now. Sara and I made him lay in the bed and rest while we drove back to the campground.

I think I will be processing this traumatic day for a little while yet but I am just so relieved to have my husband back. He’s alive and well and that’s all that matters right now. 🙂 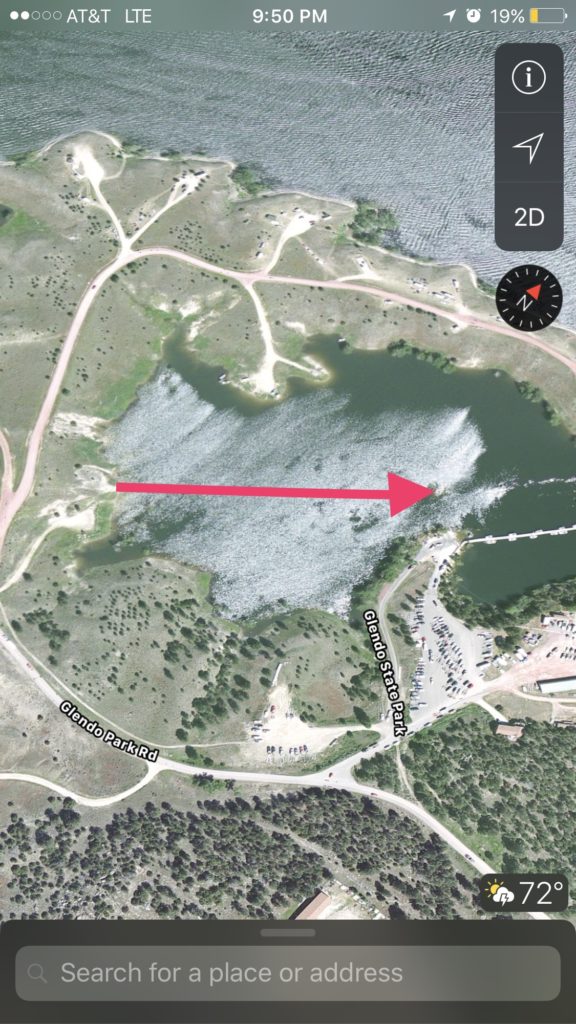