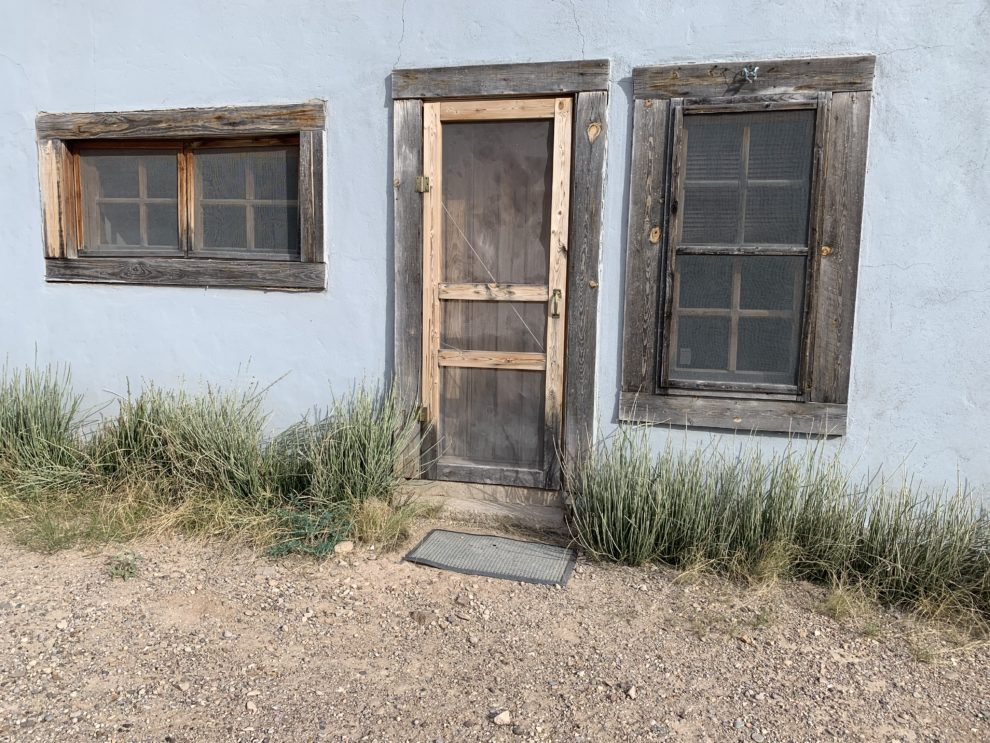 Saying Goodbye to Our Miracle House

We arrived at our beautiful new rental house on the evening of April 10th. We were greeted by a juicy black widow spider under our kitchen table with a red hourglass on her belly. We quickly set to work on clearing away spider webs, sweeping out the dust and cleaning the bathroom. It wasn’t long before we settled into a comfortable routine of laundry, cooking, work and rest.

I guess, depending on your perspective, you could say it was an uncomfortable routine. We made the decision not to invest in furniture or an air conditioning until we were sure this house would work out. So, all we had were the two tables and the hard wood chair that was already here. I joked that the toilet was my comfy chair. For the first few weeks we were sleeping in the car. The closest big city is 6 hours away, so we waited until we were really motivated to drive up there to buy cots and mattress pads. Even the health food store is 2.5 hours away. But we didn’t care. The joy of having a home and running water and a shower and a big refrigerator was enough for us.

We were already dreaming of getting chickens and putting in a garden. We spent the evenings watching Justin Rhode’s permaculture videos and talking about what vegetables we might grow and what animals we might raise. Then we would go on long walks up the dirt road next to our house. The views were beautiful. We often witnessed the beauty of the sun going to sleep behind the mountains as we turned around to walk back home. Oh! How we needed that stability and rest!

Just over two weeks after we moved in, the sweetest Boxer you ever met arrived on our property. Skin and bones and affectionate as all get out, she was clearly starved for both food and attention. Ramona, our Cavalier, is usually very uncomfortable around other dogs, but she took to this Boxer right away.

I fed her some of Ramona’s food before Brett could remind me that she might have owners. We found out from talking to a neighbor that she did indeed have owners but they didn’t necessarily feed her or look after her. Realizing that I had fallen in love too quickly, I prayed that God would help me not to covet and resolved to march her right back to her owner’s house the next morning. We stopped feeding her and didn’t let her into the house, but she was determined to stay.

We called our neighbor the next morning to ask for the owner’s name and number but she told us she didn’t have his number. She said the owner probably wouldn’t come looking for her and wouldn’t care if we fed her. She didn’t think taking the dog back and insisting they take care of her would change the situation. “They’re not going to feed her if they know others will do it for them.”

So, we let her in the house, fed her, and bought her a bed. Beverly Cleary fans can probably guess that we named her Beezus. She made herself at home immediately and we all fell in love with her! Even Ramona has been noticeably happier since Beezus arrived. Eventually, the owner did come back to take her away but after some friendly discussion, it was agreed that Beezus is officially our dog.

It was really fun to watch her come alive as she started to gain some weight. It wasn’t long before she had the energy to run and spin around playfully on our walks. She’s a sociable and well-behaved dog who is eager to please. She‘s clearly never lived in a house before but is so obedient that we only had to tell her twice not to put her paws up on the table. She never tried it again.

I was in doggy heaven and the future was looking really hopeful. I told Brett on one of our walks that I thought I was the healthiest I’d ever been. I was keeping up with daily hand-washing, cooking, walking and even able to work-out on top of it all. I was free from pain, fatigue, brain fog, depression and anxiety. I was reading books and bursting with new ideas. My dreams were alive and kicking. My thoughts were again wandering towards having a baby.

Pretty soon, I’d have the mental bandwidth to reorganize my blog and start writing more consistently. Pretty soon I’d have the emotional energy to call all my friends and finally reconnect with them one by one. We now have a landline and I was excited to use it. (When we were staying in hotels, I discovered that phone calls on a landline aren’t nearly so draining for me as phone calls that happen over cell phone radiation.) I did call my best friend from grade school and found that I felt like my old self again. I could talk freely with no anxiety or brain fog.

Unfortunately, only two months after we moved into the house that was supposed to provide us with long term stability, a buyer showed up. This house and the two other buildings on the property have been on the market for 10 years… and two months after we arrive, a buyer shows up?! The landlord had agreed to give us the right of first refusal but we weren’t expecting to have to make a decision so soon. It all seemed so fishy. So much pressure! We didn’t know what to do.

Then, only a few days later, while we were taking a peaceful family walk, Beezus got into a fight with a wild boar. Some hunters say that wild boars are more dangerous than bears. This story deserves it’s own blog post, so all I will say here is that it ended with Brett sprinting a mile back home to get the car and me shaking and screaming “Jesus! Help!” as I tried desperately to stop the blood gushing out of Beezus’ neck. It was more blood than Brett or I had ever seen in our lives.

She survived the night only because we took turns staying up to hold pressure on the puncture wounds. We had no first aid supplies and the closest veterinarian was 2.5 hours away. Suddenly, our beautiful desert home began to feel unfriendly and dangerous.

We got her to the vet the next morning but it was several days before we knew for sure that she would make it. It almost broke my spirit. After four nights at the vet, we were able to bring her home with a well-bandaged head and an e-collar.

That was the day the buyer came to look at our house. After receiving wise counsel from family and friends we decided we would bow out. It just wasn’t a good time for us to be buying a house, even a great 124 year old adobe house. It was too soon to be making a commitment and the financial strain would be too much. Our hope was that the buyer would change his mind after seeing how remote the location is and how old the buildings are.

Silly us. It turns out this man is a photographer who loves old buildings and has always dreamed of living in this remote desert wilderness. He’s very excited about buying the property. He doesn’t care that it’s so overpriced it hasn’t sold in 10 years. His heart is set. He’s buying it!

Two days later, he came to stay in the building next door, and being accustomed to certain creature comforts, turned on the ancient air-conditioning units. It only took a few hours for this to make the entire property uninhabitable for me. As other mold sensitive people can attest, when air conditioners go moldy, they can be a real problem! But it was over 100 degrees, could you really blame him?

Suddenly, we were homeless again. How could this happen? We spent the next two weeks tent camping and are finally home now that he’s gone. Everything is back to normal and the air feels great again. But we just found out he’s coming back in two weeks. So, we literally have two weeks to move out. And go where? Wasn’t this house a miraculous answer to prayer?

I wish I could find some way to spin this into a hopeful tale of faith and perseverance but I really don’t understand why this is happening. I feel like we just had the rug pulled out from under our feet.

I might despair if it wasn’t for an email we received from one of Brett’s writing students. She was completely unaware of what was going on when she wrote this.

“I hope y’all are doing well! God laid you both on my heart the other day and I just wanted you to know that I’m praying for you!

As I was reading Joshua recently, I came across verse ‪21:45‬: “Not a word failed of any good thing which the Lord had spoken to the house of Israel. All came to pass.” For some reason, I thought of you. While the context is different, I love how this verse describes the character of God as always fulfilling His Word and being faithful to His promises. If He said it, He will do it, even if it’s not in the way or time we think. Praying this verse would be true for you both….that God would bring all good things that He’s promised you, in His Word and in your lives, to pass.

Anyway, I just wanted y’all to know that you’re often thought of and prayed for!”